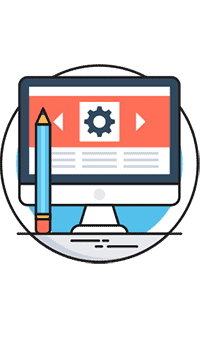 If You’ve Ever Wanted to Create a Highly Profitable Webinar, But You Didn’t Know Where to Start… Here’s Your Solution!

This package of ten tools and resources will show you exactly how to impress your audience, fill your webinar seats, and generate loads of post-webinar sales! Take a look…

Some time back I asked a client of mine how many webinars he’s planning to run this year.

He looked down. He shuffled his feet. “None,” he sheepishly replied.

“None?” I cocked an eyebrow.

I pressed him on this. I couldn’t believe what he was telling me. This is a guy whose business depends on him positioning himself as an authority in his niche. He needed that connection.

Sure, he was distributing ebooks, doing guest blogging, had a presence on social media, and he was trying to get his name out in other ways. But he wasn’t doing webinars. And I knew it was going to kill his business sooner or later. His competitors were doing webinars, and his clients were going to start taking notice.

Because you know what?

In today’s social-media-driven business climate, trying to market your business without webinars is like trying to drive a car without wheels!

Darn thing will make a lot of noise, but you won’t get anywhere fast!

Webinars are great lead-generation tools. People who are willing to spend 30-90 minutes of their time with you tend to be well-qualified prospects, which makes your webinar list very valuable!

Webinars are great for relationship-building. Whether you want to introduce yourself to a niche, establish yourself as an authority, or just develop better relationships with your market, a webinar is a great way to do it.

Webinars are great pre-selling tools. You get anywhere from 30 to 60 minutes to warm your audience up and put them in a buying state of mind… you can bet they’ll hit the “buy now” button just as soon as the webinar is over!

Webinars enjoy a high perceived value. That means they’re value much more than your run-of-the-mill ebook, so people will pay more attention to your webinar than to just about any other type of information!

Holding a webinar is a fast way to create a product. You prep for your webinar, you spend 30-90 minutes delivering the content, and then you’ll have a recording that you can sell or distribute for months or years to come!

There are a lot of GREAT reasons to do webinars.
But there are also a lot of potential problems
holding you back… right?

My client gave me a few reasons why he didn’t do webinars. I talked to others who weren’t doing them either. And here’s what I kept hearing:

I have no idea where to start

I don't know how to create an hour-long event

It all seems very overwhelming

Maybe some of those reasons sound familiar. Maybe you have some of your own reasons for not doing webinars. Maybe you don’t even know the reason why you haven’t hosted your own webinar yet…

But I do know one thing – you WANT to do them. You wouldn’t be reading this if you didn’t want to start enjoying the big list and profits you can generate from doing webinars.

And that’s where I come in. I’m going to shortcut the learning curve and give you the tools and resources you need to create webinars the fast, easy and profitable way!

Introducing Webinar Profits:
A Stunning Collection Of 10 Killer Templates, Swipes, Checklists, How-To Guides and More That Makes Creating Your Own Webinars
Faster, Easier and More Profitable Than Ever! 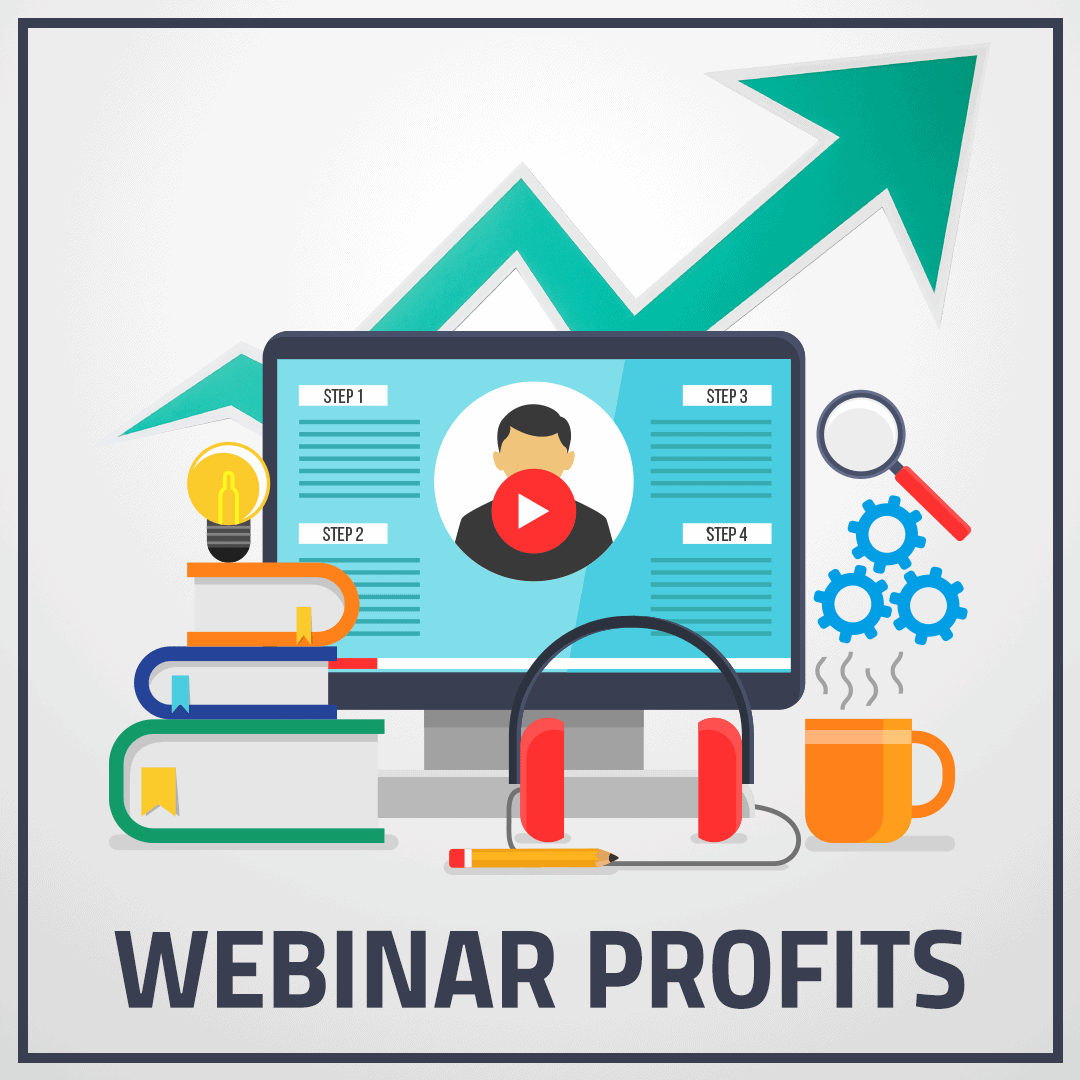 These 10 tools make light work of creating a webinar. You’ll get everything from help with creating your webinar script and slides, to marketing tips to fill your webinar seats!

End result? A bigger list, more sales, and more revenue flowing through the backend of your business!

If you’re liking the sounds of those benefits, then take a look at exactly what you get inside this exciting package of 10 tools and resources…

This 14-day planner shows you exactly what you need to do every day to create your webinar. Steps include creating content, getting your lead page up, building anticipation in your audience and much more. This planner makes webinar creation surprisingly easy, it helps you get organized, and keeps you on track!

One of the keys to having a successful webinar is to share a high-converting product pitch during the event with the goal of generating a lot of sales.

So how do you create this sort of perfect product pitch? You can start by using this checklist guide, which takes you through these three steps:

So you’re getting ready to host a webinar, and you want to makes sure it all goes off without a hitch. You’re looking to fill those seats and generate a lot of sales on the backend. If all of this sounds good, then you’ll want to use this 10-point checklist to make sure you have all the essential ingredients in place. You might be surprised by how many of these 10 pieces you’re currently overlooking!

When you’re planning a webinar, one key decision you need to make is how to structure it. Most people think about two or three different ways to do it, which is pretty limiting. That’s why you’re going to love these proven 15 content recipes that will keep your attendees engaged, impressed, and staying on your webinar right to the very end!

You’ll learn about the VSL webinar, a fear-logic-gain webinar, the live proof webinar, the “ways to” webinar, the group-coaching webinar… plus 10 other proven ways to put on an awesome event!

You’ve got a great idea for an awesome webinar. You just know your attendees will love it. But what you need to do next is fill those seats. And that’s exactly what you’ll find out how to do with these 50 ideas for generating a ton of excitement and sign-ups for your next webinar!

One of the most popular types of webinars is the training webinar, where you teach your viewers how to complete some specific process or achieve a goal. Now if you’ve never done one before, you might be scratching your head and wondering how to go about it. Wonder no more – you’ll get a complete fill-in-the-blank template you can use to create your webinar script faster and easier than ever!

(Hint: this template alone is worth the entire price of this package – if you hired a ghostwriter to create your script, you’d pay ten times as much!)

When you’re planning a webinar, there are two things you need to do with your mailing lists:

Inside you’ll find 10 email swipes you can use for both of these purposes.

You’re all excited about your webinar. You have these visions of people signing up like crazy until you’ve filled every single seat. And you imagine a webinar full of eager viewers who’re sitting there with their credit cards in hand, ready to buy whatever you’re promoting.

But the reality? Nada. Zero. Zilch. You struggle to get even a handful of sign ups.

Don’t let this happen to you. What you need to do is to create an opt-in page that gets people signing up for your webinar like crazy. And that’s exactly what you get when you download these five surefire fill-in-the-blank opt-in templates!

Do you have any idea how important it is to create a set of good slides for your webinar? If you get this part wrong, you’re going to have people slumping over in boredom during your webinar. They’ll hang up. And they’ll take their potential sales with them.

That’s why you want to create amazing slides that will keep your audience hooked, engaged and paying attention. And that’s exactly what this step-by-step guide will show you how to do!

One of the keys to creating a successful webinar is to plan every step of it carefully. The more you know about the who, what, how and why of your webinar, the better your overall end product will be.

Want to kick start your planning? Then use these five worksheets…

You’re Going to Say “WOW!” When You
Use This Package To Create Your Profitable Webinar!

Sounds good, right? You’re getting this entire package of ten tools and resources to make light work of creating your next webinar. And you know what?

By the time you read about all these strategies and put these tools and templates to work for you, you’ll know exactly how to create impressive, profitable webinars that your viewers are sure to love!

I know you’re liking what you see. You know this package of ten awesome resources and tools is just what you need to get your first webinar up and running the quick and easy way.

How Much Is It?

This is the part that’s going to put a huge smile on your face. Because if you act right now, you can get everything you see on this page for just $27.

Think about it for a moment, and you’ll quickly realize this is an amazing deal. That’s just $2.70 for each of the 10 tools and resources. When was the last time you got something this valuable for less than five bucks for each piece?

Take the example of the landing page templates which are included in this package. If you had a professional copywriter create your landing page, you’d be out at least a couple hundred bucks (and probably a whole lot more).

But order this package now, and you get FIVE templates for one low price… plus everything else mentioned on this page! These tools and resources are going to save you a TON of time and money, so order now below…

Act now and you can take advantage of the special introductory sale pricing of just $27 for everything you see on this page!

But hurry, this special offer won’t last long, so click the buy button below now to get started!

This package is worth every penny of the $47 price tag. But why pay more when you don’t have to? If you’re quick, you can grab this package of 10 webinar tools and resources for a steal.

You won’t find a better deal around, so get yours now while you still can!

How Can We Offer A 100% No-Questions Asked, Money-Back Guarantee?

You've made a great decision! Now, it's time for us to live up to our end of the bargain. And we always do, no matter what the issue is.

Our reputation is the most important thing we have at NAMS. We've helped hundreds of students create new businesses or improve existing ones.

Still, we want to make this even easier for you!

Our fool-proof guarantee says that you will have 7 days to decide whether this is for you.

And frankly, it's not right for everyone. Only those who are serious about taking control of their lives and their businesses need apply! But if that's you, jump and we'll assume all the risk. If you change your mind for any reason within 7 days of purchase, we'll happily refund your money.

You have nothing to lose! There's no risk to you. Try it and love it. If not, you can get your money back easily, quickly and safely with our fool-proof guarantee!